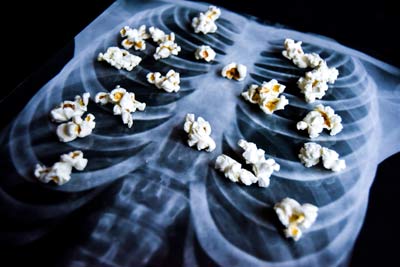 From King Arthur and Merlin the Magician to Noah’s Ark and the Great Flood – myths and legends are the kind of alluring subject matter that has the tendency to invite wild ostentatious discussions amongst keen conversationalists. Indeed, there are those individuals predisposed to engross themselves in gossip spreading, far and wide misinformed titbits of hearsay to any ears that find themselves within listening distance.

Of course, e cigs and vaping have faced their fair share of negative myths; with one of the biggest problems being the problematic rumour pertaining to popcorn lung. Whether you’re a smoker resisting the switch to e cigarettes for fear of contracting this gnarly sounding disease, or are a part-time vaper erring on the side of caution to become fully committed to the cause to become smoke-free because you might start coughing up popcorn - read on, read all about it, and feel rest assured that what might seem to be the stuff of your worst nightmares, is merely a myth to be set to one side and read around the campfire.

What is Popcorn Lung?

Popcorn lung is the nickname given to the lung condition bronchiolitis obliterans which damages your lungs’ smallest airways which in turn induces shortening of breath and coughing. The nickname popcorn lung was inspired by the events and circumstances of factory workers contracting the condition whilst packaging microwave popcorn containing the chemical diacetyl.

Can I Get From Popcorn Lung from Vaping?

Popcorn lung became associated with vaping due to some e liquids using the ingredient diacetyl to flavour their juices. While these e liquids may contain small quantities of diacetyl within them, there is no evidence to suggest that you can contract popcorn lung from vaping.

If you buy your e liquid from a reputable seller within the UK you will more than likely be free of the dangers of diacetyl as in 2016 use of the chemical within e liquids was banned in the UK under the EU Tobacco Products Directive.

Did you know that in 2015 that Public Health England (PHE) - the body responsible for governing our health here in England - declared vaping to be 95% safer than smoking and that e cigs have the potential to help smokers quit. If we don’t say so ourselves, that figure represents a significant saving to the harm you're subjecting your body to every time you smoke.

Help quell the rumour mill that surrounds vaping and spread the word that popcorn lung is a mythical beast that died out with unicorns and mermaids and that vaping is, in fact, a far less harmful alternative for getting a fix of nicotine.

As National Popcorn Day approaches (yes that’s a thing), why not pop a few kernels with some friends and get comfy on the sofa for a night in with some legendary movies. Perhaps after you’ve eaten your popcorn (best not make anyone feel unnecessarily queasy) why not share your new found wisdom on popcorn lung with your pals and help dispel a myth that may be preventing someone you know from being able to quit smoking and start vaping.