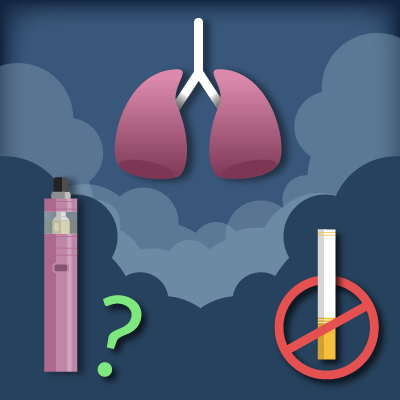 Vaping should be a means to an end. Nobody should pick up an e-cigarette for the sake of it unless they smoke or are tempted to restart. The concern for many is how e-cigarettes and e-liquids together affect the body. Will vaping impact your heart, throat, breathing, weight, mental stability and fatigue like smoking does? Is vaping bad for your lungs and overall health, or the same? These are just some of the questions that cross the mind of a vaper. While it’s recommended by many to vape instead of smoking - to save money as a cheaper alternative as one example, does it also change your breathing and lung function for better or worse after giving up cigarettes?

The pattern and habit are the same. Holding an e-cig, putting it in your mouth, inhalingand exhaling to get nicotine into the system. Since the 1st of July 2007, the UK government banned smoking in public places and a large part of that reason was to protect against passive smoke entering the lungs of those who do not. Because of the similarity, vaping often gets the same treatment. For instance, e-cigarette users need to vape outside airports in the smoking area. Because of negative press in the media and the physical similarity to smoking - not just inhaling into the lungs but passively vaping towards others in the vicinity is often frowned upon.

To understand this concern, we first need to recognise what smoking does to the lungs, as it’s a comparable habit by nature to vaping but far more research on the dangers of smoking tells us why it's dangerous.

What Does Smoking Do to Your Lungs?

Smoking by any stretch of the imagination is bad for you - plain and simple. Inhaling thousands of toxic chemicals - hundreds of which are unknown - can’t be good for the body and mind. Unfortunately, once a person is addicted, it’s difficult to leave the habit of smoking behind. Your lungs do not thank you for this, as that combustible tobacco turns into a sticky black substance called tar, which sticks to the lungs like mucus. That then builds up over weeks, months and years, eventually causing Chronic Obstructive Pulmonary Disease (COPD), damaging the Cilia (small hairs which help protect your lungs from dirt and infection, as well as narrowing the small tubes that absorb oxygen (Bronchioles). 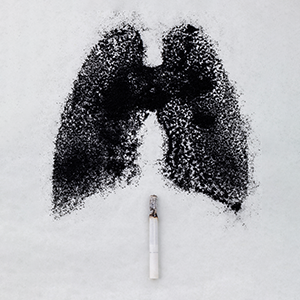 Once you quit smoking for good, your lungs will instantly start to heal. Although coughing can occur once you start vaping, it quickly passes when you follow a few simple steps. The below results demonstrate how quickly you can improve after giving up smoking, highlighting what a difference it makes with time, determination and resilience:

As you can see based on information supplied by the British Lung Foundation, the results are not just impressive over the first few days but certainly over the next few years when you put down the cigarettes for good.

Is Vaping Bad for Your Lungs?

The massive difference between inhaling vapour and smoke into your lungs is no tobacco with vaping. All you have is the nicotine from the tobacco plant so you’re not going cold turkey but also removing tobacco consumption, which takes roughly eight million lives a year worldwide. The visual difference between inhaling the two is also clear, with no black tar from vaping, as shown by this video study. The level of carcinogens from e-cigarettes compared to smoking are nine to 450 times lower than with cigarettes. Vaping particles disintegrate quicker than cigarette smoke too, meaning they do not linger in the air for up to 45 minutes as smoking does. No tar from lack of tobacco combustion or carbon monoxide presence means easier breathing, clearer lungs and a safer experience for getting nicotine in the system if it’s needed. Out of the two, a balanced e-liquid with nicotine is still much safer and less damaging to the lungs than cigarettes.

In addition, it’s important to go for a recognised e-liquid manufacturer which clearly states the ingredients on the bottle or product page. Typically, they contain a mixture of PG and VG acting as the carrier for the nicotine. These are very mild chemicals on the lungs but should be approached with caution and not considered if you’ve never vaped or smoked. 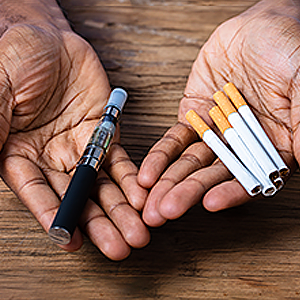 What About the Popcorn Lung Theory and EVALI?

No evidence exists in respected UK medical studies suggests that the ‘Popcorn Lung Theory’, relating to the lung condition bronchiolitis obliterans, which damages your lungs’ smallest airways, is caused by vaping. The same goes for the medical tag of ‘e-cigarette or vaping use-associated lung injury’, otherwise known as EVALI. This is from US media and medical literature, leading to the ban of vaping in some US states. Although there initially appeared to be a link between vaping and EVALI, the chemical substance vitamin E acetate later proved to be the cause, which is illegal in the UK thanks to TPD regulations in place for the production of any e-liquids.

Is Second-Hand Vapour Safe for the Lungs?

Another concern among vapers and those about to start after switching to e-cigarettes from smoking is whether the vapour from the e-cigarettes of others gets into your lungs and causes damage to them. This is natural because despite appearing thicker in volume and density, vapour does bear a resemblance to cigarette smoke. Nevertheless, no significant research to date points to the fact that passive vapour is dangerous or unsafe. If you need to learn about any other potential side effects of vaping, you can read here, where we delve into the common mild short-term issues such as headaches and coughs.

Whether you’re a new vaper or experienced, you’re wanting to use an e-cigarette in most cases to help you give up smoking and improve your health. Many case studies from vapers show breathing can improve and daily activities seem less of a challenge when you stop smoking. That’s because of the dangers smoking poses to anyone who tries cigarettes. You can’t undo what you’ve done in the past but you can improve moving forward, with vaping looking like a key tool to not go completely cold turkey and reduce your nicotine levels. No associated deaths from vaping through lung injuries have occurred in the UK and all evidence so far (although limited) prove it’s a better alternative for your breathing organs than smoking.