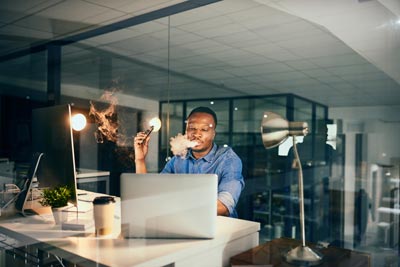 There’s no doubt about it. For many, vaping continues to be seen as a viable way to quit smoking, yet when it comes to convincing naysayers of the potential benefits of e-cigarettes, doubts remain. In what has been a busy few months for the vaping industry, let’s take a look at some of the headlines hitting the news and how this might affect you in the future.

E-cigarette use in the UK

In July, the NHS published their report, Statistics on Smoking, which among many of the figures revealed included the use of e-cigarettes amongst the UK population in 2017. Encouragingly, according to Office for National Statistics, the numbers of UK tobacco smokers has fallen from 15.5% (7.4 million people) in 2016 down to 14.9% and when it comes to vaping, 5% (2.8 million people) of the population admitted to using e-cigarettes, with as many as 48% of those saying that they vaped in an effort to quit smoking and 30% perceiving e-cigarettes to be less harmful than tobacco.

Struggling to get life insurance because you vape? The differentiation between smoking and e-cigarettes took a significant upward turn this year, as insurance companies begin to lower rates for those who vape. Among the few insurance companies to reward vapers for their endeavors to quit smoking, is Cura, who Vapour2 have teamed up with, to provide their customers with near-non-smoker rates for those who use e-cigarettes. That’s a win for the industry and a win for you and your family’s security.

In August, following an extensive inquiry into e-cigarettes by the Science and Technology Committee, vaping industry members and MP’s began making recommendations to the Government over a plethora of laws pertaining to the use of e-cigarettes. Among the changes being lobbied are potential tax-breaks for vaping products, allowing a wider use of vaping in public spaces as well as a call to reconsider the regulations that surround e-cigarette packaging and the advertising of vaping products.

UK Urge WHO to Reconsider Its Position on Vaping

Amid fears that the World Health Organisation are encouraging states to ban the use of e-cigarettes, the UK, together with a cohort of international co-signatories are urging the international health agency to reconsider its stance on vaping. Following Public Health England’s declaration that e-cigarettes are up to 95% less harmful than tobacco cigarettes and that they may provide the potential to aid smokers to quit, countries such as Thailand, Australia, Brazil and some parts of India impose strict penalties and even jail time for being on possession of e-cigarettes or e-liquid.

No Sin Tax for Vapers

Earlier in the summer, the rumour mill was awash with news that e-cigarettes may be subject to a sinister kind of sin tax. Usually reserved for the likes of tobacco, alcohol and other such damaging substances. Alas the rumour was just that, as UKVIA (UK Vaping Industry Association) received confirmation from HM Treasury that no-such tax was planned for vaping. A Vapour2 Standard Starter Kit alludes health with harm-reduction and has economic benefits with a great entry price.

Stay up to date with the latest news, views, and reviews by signing up Vapour2’s Vaping Good News newsletter.