Electronic Cigarettes in the Workplace

You might have seen a lot of coverage recently regarding the use of  Electronic cigarettes in the workplace, but why? It is perfectly legal to use your electronic smoking device in the workplace, if your employer allows it, so what is the fuss about?

It would seem that a growing number of employers and local governments are putting a workplace ban on e-cigarettes despite there being no legal reason to do so.

Since 2006 smoking of a traditional tobacco based device in an enclosed or substantially enclosed public place, including the workplace, has been banned under the Health Act 2006 and associated regulations. This ban includes all manufactured and hand-rolled cigarettes, pipes and cigars.

The issue for employers though is that because e-cigarettes are a battery powered device that vaporises a nicotine solution to replicate smoking without the use of tobacco, they aren’t currently covered under the Health Act. These devices do not give off smoke and so far all evidence suggests they are not harmful to others.

Employers have an E Cigarette Dilemma

If the use of e-cigarettes is not unlawful at work, should their employees that use them be treated in the same way as normal smokers and be directed to the designated smoking areas?

The users of e-cigarettes have been arguing that, as they are not actually smoking, they have a right to be provided with a smoke-free environment and should not be forced to be with tobacco smokers who’s habit is known to constitute a health risk to others.

People using e-cigarettes are also arguing that by having employers include them in a company-wide ban from smoking in the workplace, even though their devices are not directly covered by the legislation applying to normal smokers is being unsupportive of those who are using e-cigs as a means of giving up smoking.

The NHS are just one of the employers who have decided to include e-cig users in their smoking bans , and a spokesperson for NHS Fife has been quoted as saying that the NHS have identified “Potential fire and safety risks.” And state in defence of their tough stance that "the heating element provides a source of ignition similar to a traditional cigarette which could ignite bedding or clothing."

The House of Commons is another high profile establishment who has come down hard on the e-cig users, with the use of the device being forbidden under the same rule that applies to traditional tobacco cigarettes.

ACAS has even had so many employers contact them that they released specific advice for employers in regards to e-cigarette use within the workplace.

E Cigarettes and working from home 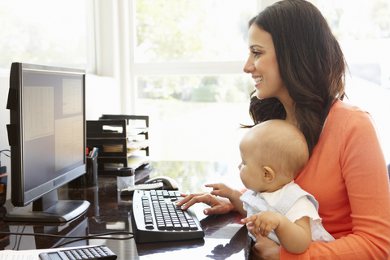 If a local council bring in legislation regarding e-cigs in the workplace then because we are working from our own property, are we are exempt?  Actually, no !

The Welsh government are hoping to bring the use of e-cigs into line with current smoking bans by the end of 2016, meaning that anyone who is caught vaping in their home while working (maybe even checking emails in bed!) could potentially be facing a hefty fine.

Although the Public Health (Wales Bill) does not ban the use of e-cigarettes and vaping in people’s homes or in prisons, if you work from home during any hours that you are working, even if it is outside of normal office hours you will not be able to use the devices as they will be banned in 'workplaces'.

Potentially there are instances where you could be found to be breaking the law without meaning to while using the devices outside working hours - Health minister, Prof Mark Drakeford has quoted a series of scenarios where it would be down to a court could decide you are breaking the law in your own home.

When questioned about it, a Welsh Government spokesperson stated, “The Bill sets out that workplaces are smoke-free all of the time, with the exception of homes which are used as workplaces. Where part of a home is used as a workplace, it is only to be smoke-free when used as a place of work.”

But also wanted to make it clear that “The owner or occupier of a home that is a workplace would be permitted to smoke or use a nicotine inhaling device when the premises are not being used as a place of work and are not open to the public.”