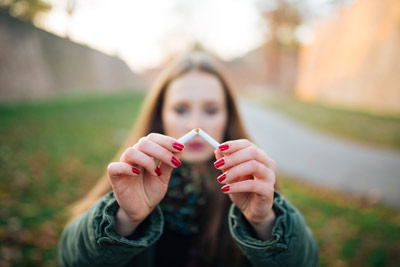 Whether you’re a smoker looking to make the eventual change to become smoke-free, or are in the midst of your e-cigarette journey, the chances are that this isn’t the first time you’ve heard that smoking is bad for you. Where once Britain held a fume like affinity with cigarettes the number of smokers in the UK continues to decline and a new study now suggests that Britain could be set to steer itself clear of tobacco altogether and become a smoke-free nation by 2040.

A smoke-free population is typically considered to be 5% or fewer smokers, which means that if current trends continue their exponential decline, the UK may reach that number in just over 20 years. The study carried out by Frontier Economics and funded by the major tobacco manufacturer Philip Morris Limited ( Marlborough, Benson & Hedges, John Player ) went onto suggest that should an extra 219,000 smokers make the quit per year, then a smoke-free Britain could be a reality by 2029.

Peter Nixon, the managing director of Philip Morris Limited commented; "We want a smoke-free country as soon as possible - 2040 is too long to wait,"

Tobacco And Smoking Prevalance in Britain

Did you know that smoking-related deaths account for up to 16% of all adult fatalities in the UK? A sky-high figure related to a consumable product readily available to purchase, though a figure that has, in fact, reduced drastically in recent times. While the number of smokers in the UK today sits at an estimated 7.4 million adults (15.5%), you don’t have to look too far back in time to see quite how tobacco captivated our consumption of tobacco. In 2006 22% of UK adults admitted to smoking and in 1980 that figure was an astonishing 39%.

As the numbers suggest, times have inevitably and thankfully changed for the better, though of course there is still work to do. MP Steve Brine, the Minister for Public Health, said "Our vision is to create a smoke-free generation. Smoking continues to kill hundreds of people a day in England, and we know the harms fall hardest on some of the poorest and most vulnerable people in our society”.

The Number of Vapers is Increasing

In 2015 Public Health England declared e cigarettes to be up to 95% less harmful than smoking tobacco products and that they have the potential to help smokers quit, Vaping has proven a popular method for smokers aiming to become some-free with some 3.2 million vapers in the UK now estimated in 2018 – a number that has risen by an impressive 300,000 in just one year.

Currently, MP’s and e-cigarette industry officials alike are attempting to change the existing advertising regulations that mean that vaping companies can’t publicise the potential health implications of e-cigarettes. If the advertising restrictions imposed on the vaping industry were to be lifted than the potential for the number of vapers could increase significantly further and a smoke-free Britain might be achieved sooner.