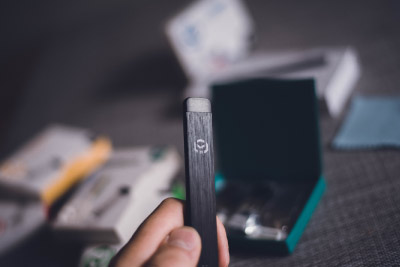 If you’re familiar with contemporary colloquialisms and vaping culture then you may already be familiar with JUULing or ‘’jewelling’. But if you’ve simply heard the aforementioned words in passing and are left perplexed and wondering what they might mean – just what is JUUling? Let us fill you in.

The good news is that Juuling (pronounced ‘jewelling’) isn’t some new dangerous craze that all the kids are into. Juuling is in fact, just vaping, albeit with a particular nicotine delivery system. Deriving from its namesake vape brand Juul, Juuling is simply a slang word for what is more widely known as vaping with a pod kit.

Like the e cigarette, vape pen and box mod, a pod is another kind of vaporizer that will essentially do the same job as the other vape devices albeit, in a slightly different way. While all devices are designed to provide a vaporized hit of nicotine to replace the hugely harmful past time of smoking, each vaporizer device has its unique benefits depending on the vapers disposition.

Where an e-cig might use a screw-on disposable cartridge, a vape pen or box mod will use a refillable tank that you simply top up with your favourite e-liquid.

On on the other hand, vape pods use a closed system that looks - as you might have guessed - like a small pod. Rather than using conventional e-liquid, pod kits are designed to be used with nicotine salt based e-juice, which are regarded as a stronger more satisfying hit of nicotine compared to its predecessor.

A common complaint within the vaping community is that you have to vape more than you would smoke in order to get the preferred hit of nicotine. With vape pods and nic salts, its thought that because the hit is that satisfying, you can actually vape less, thereby reducing the habit of vaping and  becoming both smoke-free and nicotine-free.

The Best Alternative to Juul

There are all sorts of vape pods, but the common design is a simple flat rectangle shape design that is free of buttons. Simply inhale and vape away – it’s that easy.

One of the best vape pods out there is the iQ Air. With each pod filled with nic salts e-juice, you can expect to enjoy up to 200 puffs, which is the equivalent to a deck of 20 cigarettes. Smart and smooth, the iQ Air is a discreet, super lightweight vape pod, with a battery life that’ll see through from morning till night.

As with many of life's consumable items - fashions, trends and even the name of things have a habit of changing. What was once the norm passes and becomes consigned to the vintage, retro and antique. While e-cigs, vape pens and box mods are far from being vintage or retro, vaping devices such as the iQ Air and the Juul, from where the slang term juuling has originated from, are simply the next step in vaping technology.

While the long-term health impacts are yet to be discovered, the short-term health impact appears to show that vaping  e-cig are less harmful than smoking cigarettes. Research has also been carried out that shows vaping to be up to twice as effective as nicotine patches and gums and has the potential to help smokers become smoke-free.