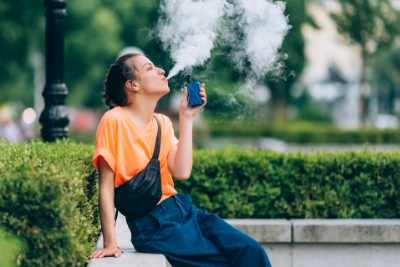 A common myth associated with vaping is that e-cigs are appealing to kids and teenagers. According to some of the reports you may have come across, this stuff of nightmares may lead to an apocalyptic-like underage vaping epidemic of epic proportions. Are the e-cigs kids a myth of fear, fact or fiction? Let's find out more.

Here in the UK and the E.U, e-cigarettes and e-liquid are regarded as tobacco products and fall under the same regulated guidelines and laws known as the Tobacco Product Directive (TPD). These laws prohibit adults from obtaining vaping products for those under 18 and it is, of course, illegal to sell e-liquids to under 18s both in-store and online. Companies caught selling vaping products to anybody under the legal age requirement will be presented with a sizeable fine of up to £2,500 for doing so.

Ultimately, kids simply should not be able to get their hands on vaping products and anybody, selling to kids or buying e-cigs and e-juice for suspicious kids on street corners should probably think twice about what they're doing and the repercussions their actions may have on those who are simply not old enough to know better.

The Concern About Young People Vaping

Where does the myth related to underage vaping come from? Vaping as we know it is still in its relative infancy. With the first devices sold for the mass market in the late 90s, the long-term health consequences for vaping are yet unknown. Despite Public Health England sharing news that vaping is far less harmful than smoking, a stigma surrounding vaping still exists in various quarters.

One of the main concerns that campaigners have about vaping is that e-cig companies actively encourage teens to try their products. Be it the futuristic design of some e-cigs complete with colourful L.E.D lights or fruity names that allude to a playful experience befitting children such as bubblegum blast, the fact is that these claims are completely unsubstantiated, not to mention ethically deplorable.

Design is often conceived from experience and feedback from those who vape to stay smoke-free. An ergonomically designed vaporizer that signals a brightly coloured light when you might be out of e-liquid or running low on battery, is a feature focused on forewarning to the vaper in question so that they can remedy the situation with a re-fill or re-charge.

Regular Use of E-Cigs in Teens Low

A recent study published by Public Health England noted that while the number of young people experimenting with e-cigs has risen in recent years, continued use was low. In 2018 1.7% of UK 11 – 18-year-olds tried vaping with those who go on to vape regularly sitting at 0.4% of 11-year-olds and 2.6% of 18-year-olds.

Because vaping is wrongly or rightly synonymous with smoking, we can thank decades of campaigning about the dangers of smoking for our relatively low number of young smokers and vapers. No longer is smoking seen as the cool thing that people do in the movies and we - young people included - have become wise to the dangers that smoking and addiction pose to our health.

Under Age Vaping in The USA

While the number underage vapers are low here in the UK, the same can not necessarily be claimed elsewhere. According to the U.S. Surgeon General, an underage vaping epidemic is in full-effect and has warned parents, teachers, government officials and health officials of the stark dangers underage vaping poses should action not be taken. With an estimated 3.6 million U.S. teens reportedly vaping, the city of San Francisco has gone as far as proposing a city ban on the sale of e-liquid and e-cigs.

With market leader Juul's headquarters located in the city, will we soon see other cities following suit? Is there a serious cause for concern? And why is there such a problem in the U.S? From a lack of age verification systems online to unscrupulous sellers in-store, it is of course down to individuals and companies in the face of what seems like an ever-growing problem across the pond.

E-Cigs Up To 95% Less Harmful Than Smoking

The relatively low number of young people vaping in the UK, as well as the number of smoking teens who try vaping and don't continue, should act as some reassurance that the rise of e-cig vaping kids is just but a myth of many that surround the world of e-cigarettes.

While the sight of kids vaping gets a definitive nod of disapproval, here at Vapour2, we are wholeheartedly in the habit of improving our customers' health. While e-cigs are not entirely risk-free and there is no conclusive evidence regarding the long-term use of vaping, what we can say is that vaping is a far better alternative to smoking cigarettes. In 2015, Public Health England (PHE) published evidence that showed e-cigarettes to be significantly safer than smoking and up to 95% less harmful. The same report also suggested that vaping had the potential to help smokers become smoke-free, a claim backed up recent research conducted by Queen Mary University London. The study looked at how effective various smoking replacement products were and found that e-cigs were up to twice as effective as products such as nicotine patches and nicotine gum.

We believe that vaping should be a relatively short-term habit that is undertaken to improve your health. There is no definitive timeline or guide to tell you how long it will take to free you from your smoking addiction, though there is help at hand. Choose nicotine strengths to suit your current needs and reduce your habit, and nicotine strength at a steady pace in line with your lifestyle.

Remember, to prevent kids from experimenting with vaping, it's down to you and those around you to be vigilant. Never leave your vaporizer or e-liquid in reach of children and store in a secure place out of sight. If you find yourself being asked by kids on the street corner if you'll purchase an e-cig for them – politely decline and remind them that e-cigs are not toys to be played with, but devices to help smokers become smoke-free.