Uwell in recent times has delivered above and beyond what’s expected from mouth to lung vapers with the Caliburn series. Starting with the original back in 2019, fast forward three years to today and we’ve witnessed the revolution of a high-end series of mtl-focused vape kits for all levels. For this review, we’re going to take a look at the Uwell Caliburn G2, which is a sleek yet practically easy to use vape pod system. Following on from its predecessor the Caliburn G, it boasts a few different features while also sharing similarities with its recent sibling the Caliburn A2. Are the changes significant enough to declare this the most reliable pod system yet?

There are a couple of minor differences with the Caliburn G2 that sets it apart from the original Caliburn G. Nothing too drastic with a similar outlook and performance but enough to highlight more control to the vaper than the original. The battery is slightly bigger, it features a clear dual-sided e-liquid window like the Caliburn A2 which shows you what’s left in the pod tank and it most significantly has adjustable airflow. In terms of reliability, you get a few more issues with leaking than its predecessor but this is counterbalanced because of the performance and longevity of the new 1.2 Ohm mesh coil, which is discussed further below.

What you can do with the adjustable airflow ring is tweak the vaping experience between one of the tightest mouth to lung (MTL) draws we’ve seen from a pod system kit to a slightly looser yet restrictive RDL draw. That flexibility is what sets apart the G2 from the original Caliburn G. Because of those potential alterations, you can maximise your nic salt options, which is perfect for smokers switching to vaping. The auto-draw activation is quicker and more reliable than the Caliburn G too.

The 0.8 Oh mesh coils are the same as the original, which is great if you have some spares lying around or like to switch between the devices. What’s different is the new 1.2 Ohm coil (9-13W) that comes with the kit and the replacement pod, which as we stated earlier has a slightly different curve appeal at the top. If you like mtl vaping this is the better draw and throat hit compared to the Caliburn G. The G2 pods will last you a couple of weeks minimum depending on the type of e-liquid used and the frequency that you vape during the day.

Because you can swap the coils out for new ones, the G2 pods last significantly longer than those of the A2 and Caliburn original which require replacement pods as soon as the pre-installed coil is spent. Because of the long life and fantastic consistent flavour you get from the 1.2 Ohm coil, you won’t feel like there is much of a difference when you swap for a new one after a couple of weeks of mouth to lung vaping. 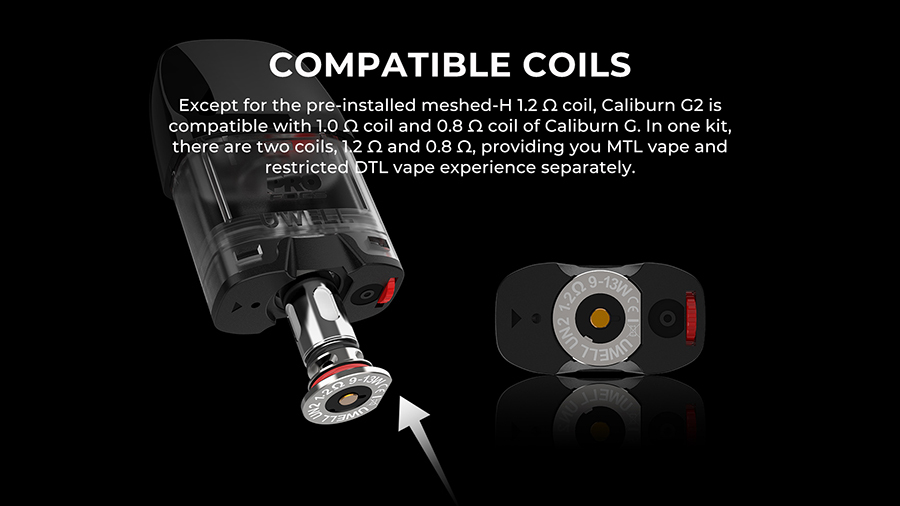 The device doesn’t feature any fancy LED screen with multiple settings to navigate through or adjust, which is a good thing for those seeking a practical and simplistic vape kit. Like the Caliburn G, it features a button which needs to be pressed five times to turn on or off. With that, the LED button will blink three times. You can hold the button to vape or activate using the mouthpiece. If the button lights red, it’s at 30% or less battery and requires charging. Flashing blue means a battery level of 30-60% and 60-100% flashes green. Meanwhile, ten red flashes will indicate the battery is about to shut off.

Haptic feedback through vibration will also highlight any issues that may crop up such as:

Aside from the e-liquid window on the G2, there is not too much difference between the old and newer version, which both weigh the same at 36g. The G2 has a slightly narrowed mouthpiece for a tighter MTL draw than the Caliburn G with grooves on the edges of the device whereas the Caliburn G had grooved edges throughout.

The updated version’s button is less protruding and therefore not as likely to go off in the pocket as the button is flush on the device. Both devices are pocketable and lightweight, so easy MTL kits to carry on the go. 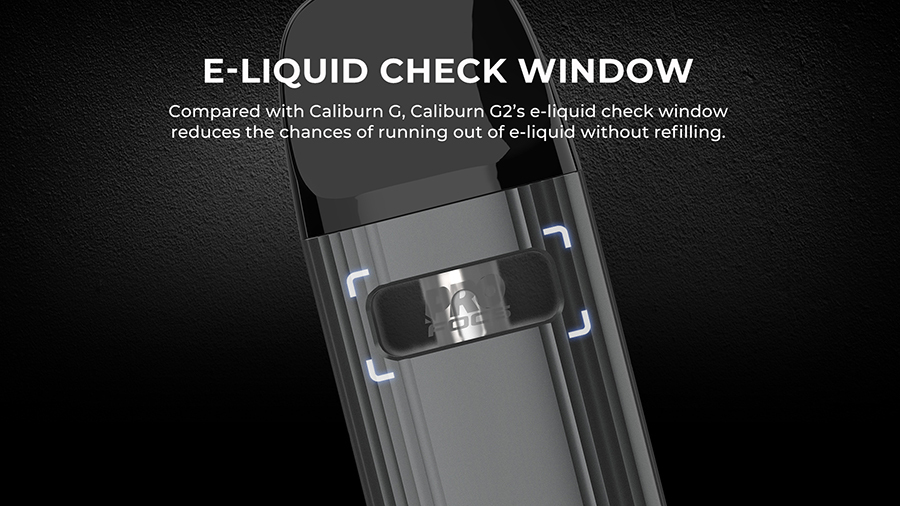 Overall, the Caliburn G2 is a definite improvement on the original Caliburn G and combining some of the features seen on the A2, Uwell attempted to pull out all the stops with this pod kit. The flavour is great and the mesh coils, whether you opt for the 1.2 or 0.8 Ohm stretch a long way and produce some excellent clouds of vapour, considering the resistance. The airflow wheel is a nice touch to aid greater control but doesn’t represent a massive leap in performance. Nevertheless, this is a reliable vape kit for beginner vapers or those who seek a strong MTL draw.