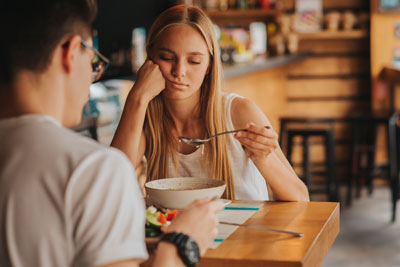 Scantily clad supermodels and stick thin rock stars holding cigarettes, pouting surreptitiously behind a cloud of thick tobacco smoke. Whilst the image and in particular the figure of the human form is conjured in your mind, the sight of a cigarette in hand plays a pivotal role in the size of the waistbands of said rock stars, supermodels and you! Of course, a lean diet of boiled chicken breast fillets and quinoa salad, followed by a strict exercise regime, and pristine vocational focus may contribute to the slender figure on displays, it is the part that tobacco and cigarettes play as an appetite suppressant that we are interested in. Rock stars and supermodels aside and back to reality - how do you avoid the dreaded weight gain when it comes to quitting tobacco?

It’s no secret that smoking curbs our enthusiasm for eating, hence why many of us consciously or sub-consciously smoke to stay trim. Indeed, in the days before we realised that smoking tobacco was chronically bad for our health, smoking would be recommended as a way to keep off the extra unnecessary pounds. In addition to the already appetite quelling qualities that exist within nicotine, historical documentation that exists, as reported by the Independent newspaper, even goes on to suggest that British and American tobacco companies may have added further appetite suppressing additives and chemicals to their cigarettes between 1949 to 1999 to further convince the general public that, if you smoke, you’ll be thin. Whether fact or fiction, smoking and staying slim have been at times a synonymous fixture.

If smoking has been suppressing your appetite this whole time, what happens when you want to quit? Worried about weight gain? A potential fear and contributing factor to the reason you’ve not given up smoking yet, may in part be down to the fear of what future you will look like without cigarettes in your life. First and foremost let us say, that whatever your size you are beautiful and you are you.

Coupled with your cravings for cigarettes onset by your addiction to nicotine, you will, unfortunately, need to endure the additional ache of sugar withdrawal. That’s right – cigarettes and tobacco contain up to a teaspoon in natural sugars (20%), which is only going to contribute to the potential weight gain you may face when you decide to embark on the big quit.

No matter how high the mountain may seem, there are answers and solutions that in time may enable you to overcome your addiction to cigarettes and become both smoke-free and nicotine-free without adding extra weight.

Take for instance e cigarettes; declared by Public Health England to be up to 95% less harmful than tobacco, vaping may have the potential to help you quit altogether. Designed to simulate smoking, a battery-powered e cigarette or vaporizer device heats e liquid which in turn is vaporized and consumed by you, the vaper. Available in a number of flavours and more importantly nicotine strengths, you’ll slowly be able to reduce your levels to suit your lifestyle and eventually become nicotine free altogether.

If you’re thinking of quitting cigarettes, you’ll more than likely be looking to become a healthier you altogether - go you! Combine your switch to vaping with regular exercise, good food and plenty of water and in time you may just find you’ve bypassed all that weight gain nonsense and are living a generally better life.

So if you’re smoking because it makes you feel skinny? Whatever your form, don’t let the appetite suppressing function of tobacco keep you from becoming smoke-free. Ditch the cigarettes and switch to vaping e liquid today.