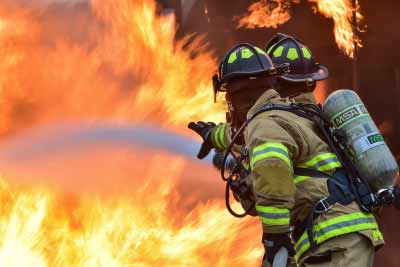 It comes as no great surprise that fires caused by cigarettes continue to wreak havoc across the country. The devastation and damage left by fire can have a detrimental and lasting impact on victims, who may have forgone the flames should they have not been smoking in the first place. Unfortunately, the sight of one's home left in ashes following a fire is a nightmare that more a few can attest to. Let's take a look at the consequences of fires caused by traditional cigarettes and e-cigarettes, as well as the best ways to take preventative measure against fire in the future.

Despite numerous regulations that have been introduced and the precautionary actions that are taken to prevent fires from cigarettes, the National Fire Chiefs Council (NFCC) reported that the number of smoking-related fires between 2013 and 2016 was estimated to exceed 16,000. In fact, smoking-related fires account for the highest percentage of accidental deaths caused by fire.

Residential homes aren't the only habitats at risk. A cigarette not correctly extinguished and left to burn on a particularly dry heathland will potentially destroy the natural homes to local wildlife and species indigenous to those specific locations. Be careful out there and stub it out!

While the number of fires caused by cigarettes is significantly substantial, e-cigarettes are unfortunately accountable for a few fires too. In the same three-year period of smoking-related fires, e-cigarettes were responsible for a total of 113 fires. However, with 16,000 fires caused by a pool of 8 million adult smokers in the UK and 113 e-cigarette fires from 2.9 million vapers, the evidence clearly points to e-cigarettes being a much safer pastime than smoking.

Why Buying a Quality E-Cigarette Matters

Although fires caused by cigarettes may be a result of a smoker falling asleep and dropping a cigarette, fires caused by e-cigarettes will typically be caused by cheap, damaged, modified or mismatched equipment. Using the wrong charger can overcharge your device, which may lead to an increased chance of fire.

With the rise in popularity of vaping, also comes to the increase in opportunistic businesses looking for a piece of the action. This means imitation devices that may use poor materials and inadequate manufacturing which may present a danger. The NFCC recommend always buying your vaporizer and accessories from a reputable seller and manufacturer and avoid buying counterfeit products. Additionally, you should ensure you use the correct charger supplied with your device and never leave your charging vaporizer unattended for long periods of time – that includes overnight charging.

Just like owning a car, it's your responsibility to ensure that your device is clean, up to date and all replaceable parts are replaced in good time. You wouldn't continue to drive a car, having never changed the oil or the tires, would you? So why would you use a vaping device that hasn't been adequately serviced? Make sure your coils are changed regularly, replace your batteries if need be and seek advice from the experts if you're unsure.

If you're a smoker, the long and short of it is that you need to stop today. It's not just an interesting statistic or coincidence that separates the number of corresponding fires caused by cigarettes and vaporizers. Vaping is safer than smoking. Fact. According to Public Health England, e-cigarettes are up to 95% less harmful than smoking cigarettes and that vaping even has the potential to help smokers become smoke-free in the future.

Save lives and stop smoking today.