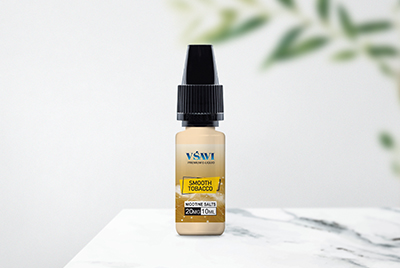 Nicotine salts, or ‘nic salts’ for short, are the naturally occurring form of nicotine deriving from the tobacco plant, in its purest liquid state. Many vapers prefer a much smoother but higher strength nic salt to get that rush previously experienced from cigarettes. Instead of freebase nicotine like in most e-liquids, nicotine salt enters the bloodstream at a faster rate for quicker absorption. We aim to debunk the myth and explain why they could work for you in an even more efficient way than traditional freebase nicotine.

What is Nicotine Salt?

The aim of the game with vaping is simple - find a better alternative to smoking so you can quit for good. While vaping has proved highly successful with millions giving up cigarettes already for e-cigarettes, the transition is difficult as smokers try to match the throat hit while equalling the amount of nicotine comparable with their smoking habits.

With nicotine in your e-liquid, you get the fix needed without any nasty chemicals in cigarettes such as tobacco, which acts as one of the key components that can seriously damage your health. However, to begin with, most pharma-grade e-liquid traditionally was freebase nicotine. That’s because ammonia – which accepts a proton from the positively charged nicotine molecule, freeing it from the salt that binds it within the tobacco leaf – is a perfect solvent for the extraction of nicotine to get the best flavour. If you like to vape fruit e-liquids, freebase is your best option. Nevertheless, it doesn’t give quite the same sensation in terms of nicotine strength as a cigarette would, which before led those finding it difficult to transition back to smoking.

Vaping freebase nicotine evaporates at a much faster rate than nicotine salt, staying in the throat or mouth for longer and not entering the bloodstream as quickly. Because freebase acts at a higher PH level, gravitating more towards alkaline, this form of nicotine becomes harsher on the throat. Some vapers like this but you will not inhale as much nicotine into your system. That’s where salt nicotine enters the equation - you can still vape higher levels of nicotine (maximum of 20mg or 2% pure nicotine) but thanks to benzoic acid, it drops the PH level to what our bodies are more used to and creates a smoother process to vape more nicotine less frequently.

How to Use Nicotine Salts

Bottles of 10ml nicotine shots on their own serve a sole purpose - to add to a 50ml shortfill bottle, honouring TPD regulations set in 2015 and enforced by 2016. These rules stated that nobody can purchase an e-liquid bottle containing nicotine at a larger capacity than 10ml. Therefore, step forward nicotine shots for shortfill e-liquids to sidestep this measure. In essence, a vaper can buy a larger bottle of nicotine-free e-liquid and then add a nicotine shot if they wish. It’s at a much weaker strength than a nic salt, so it’s perhaps more useful for someone who has already tapered down their nicotine habit. There is a gap of 10ml left in the shortfill bottle for this purpose, which you can then proceed to mix and allow to sit for 5-10 minutes. This will maximise the flavour of your e-liquid to create the best taste. Slowly we are seeing more nic salt shots entering the market which provides an even smoother vape with greater control over what you add yourself.

Adding an acid to freebase nicotine triggers a chemical reaction in which the nicotine binds to the acid, creating a salt. The addition of benzoic acid as an e-liquid additive was pioneered in the United States by PAX Labs and eventually patented worldwide. Because nicotine, although an addictive substance, is harmless on its own, whether it's freebase or nic salt makes very little difference. Providing you’re ok with the addition of benzoic acid, vaping nicotine salt should not cause any concern. The only thing to consider with salt nic is the higher content of nicotine that you could vape. If you’re not careful, it could make you feel unwell if you vape too much in a short space of time. Because of its smoothness compared to freebase nicotine, this could go unnoticed initially.

There have been many studies that highlight the impact of inhaling nicotine on your immune system. We know after decades of research the dangers of smoking cigarettes and we are starting to slowly see more on vaping. Currently, many medical organisations recognise that vaping is a safer alternative where nicotine is the only substance also used in a cigarette. The other key ingredients in a vape liquid are propylene glycol, vegetable glycerin and sweeteners. With e-cigarettes, you can even remove nicotine if needed. Nicotine can cause side effects to your respiratory and cardiovascular system according to specific medical studies, but this also depends on the amount of nicotine you consume and the frequency you do so.

The real reason why nicotine salts are so popular is simply that nicotine salt e-liquid is easier to inhale than freebase nicotine e-liquid. Ammonia has a fairly high pH of 11.6. Liquid nicotine extracted with ammonia is, therefore, somewhat alkaline. It has a pH of about 9. Adding acid to e-liquid lowers its pH, making it more neutral and thus less irritating to the throat.

Adding acid adjusts an e-liquid’s pH, making it more neutral and reducing its throat hit. The e-liquid can therefore contain a higher concentration of nicotine while remaining enjoyable to use. That’s why nicotine salts are more satisfying. A salt nicotine e-liquid can contain more nicotine than a freebase nicotine e-liquid – and can be inhaled more deeply – without irritating the throat.

Nicotine salts use Propylene Glycol and Vegetable Glycerin as the carriers, with a mixture often found in the best e-liquids. They should be vaped at a low wattage and high coil resistance to ensure you’re not tasting a burnt e-liquid. With that in mind, nic salts always work best with a vape kit (usually pod kits that are compact and easy to use) that follows these guidelines. It’s advised not to try using nicotine salts in a Sub-Ohm or high wattage device because it will kick out too much power for your e-liquid. Ideally, you want a restrictive mouth to lung vape that’s easier on the throat than freebase nicotine and replicates a cigarette to a greater degree. Below you can find some of the top pod kits to use for nic salts, maximising the potential of these high strength e-liquids:

Nic salt vapers look no further than the practical N18 vape stick from SMOK for easy mouth to lung (MTL) vaping that’s compatible with your 18-20mg nicotine salts. Just what a former smoker needs as you get the nicotine rush required but don’t need to chain vape dense clouds often to maintain the nicotine consistency. It’s got handy features like a 1300mAh battery and up to 30W of power, which you can adjust to get the right hit from your nic salt. You shouldn’t need as much because of the smooth texture from nicotine salts but it’s nice to have the adjustable feature.

It’s often new vapers that opt for nic salts, to begin with, because this type of nicotine offers the closest strength to that of a cigarette. To start your journey, it’s better to vape higher amounts less frequently while you get used to the subtle differences. Vaping with a mouth to lung kit that’s small, draws less attention to yourself and looks the part all matters. The VOOPOO brand understands how to make a stylish vape kit for beginners and the VMate ticks all the right boxes. The VMate is set at a low wattage of either 12W or 17W, depending on how much nicotine salt vapour you want to inhale in one go. The duck mouthpiece is comfortable for vapers of all levels, plus it boasts auto-inhale with built-in coils from whichever pod you select. With 900mAh battery capacity, that’s plenty for a full day of MTL vaping.

Because nic salts have a higher strength, they can occasionally cost more than freebase nicotine e-liquids depending on the brand and also not as much availability currently on the market. If you vape often but want to save on money and time consumed, topping up a leak-free vape pen with the right nic salt is the perfect combination. The V2 Vsavi Pro Series 3 is not only practical to fill but easy to charge, simple to vape and a professional design creates a smart option to carry around at work or use socially. The functionality goes back to basics for vapers needing a reliable backup or a new starter kit that supports regular e-cigarette use. The battery is improved from the previous vape pens in the Pro 3 series at 850mAh and has an increased e-liquid capacity at 1.8ml for your favourite nic salt juice.

This is a little bit of a more advanced kit for vapers of all levels but still very user friendly. With a super-fast ramp-up time of 0.003 seconds, it performs excellently and looks fantastic in a range of colours, including bronze and silver. Reaching a wattage range between six to 80 watts, you can adjust this but ideally, keep low for the best performance with nic salts. Another great feature of the Innokin Kroma-R Zlide Kit is the removable 18650 battery. That means you can charge one and keep another in the device so it never runs out. For some new vapers using nic salt, this is easier than carrying around a cable and needing to find a spot to charge up once your Kroma-R runs low. The awesome Zlide Tank that comes with the kit boasts a range of coil options including the 1.6 Ohm Kanthal coil for a restrictive mouth to lung vape that will feel like it hits the sweet spot.

Finally, we have the XEO Void which is popular with vapers throughout the UK. Capable of switching between MTL and DTL with ease, you can use this vape perfectly for nic salts with a 1.0 Ohm resistance mouth to lung coil or change over to the 0.6 Ohm when you want to vape direct to the lung with a freebase nicotine e-liquid. It offers a large 1500mAh battery and 100% leak-proof technology so you can top up your nic salts with no issues.

For more information regarding our products, advice on stopping smoking, or anything else, please see our Vaping 101 series of articles. Alternatively, do not hesitate to contact us and our customer services team, who will be available to assist.