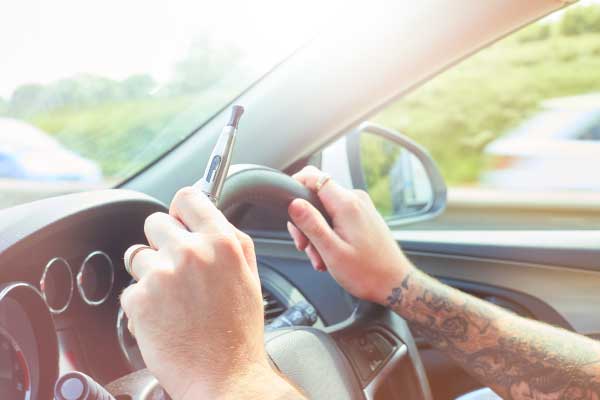 There seems to be a lot of confusion over this topic. We hear from vapers a lot, and they wonder if it is legal to vape and drive. A great many of them have heard that it is illegal to vape and drive. They insist that they read about it in a newspaper, in an online forum, or heard through a friend of a friend. Well, let’s clear this up once and for all.

No, it is not illegal to vape and drive. You can drive, and vape, and there is absolutely no law in the UK that prohibits this. Okay, we’re done right? End of blog rant. Well…we aren’t quite done. That’s because, while there is no law on the books that make vaping and driving illegal, there is a little thing called police discretion. That means that the police do have the ability to warn or fine you for certain behaviour that fits into a broader parameter.

That offence? It would be driving while distracted, essentially. “The smoke caused by vapes are a distraction and the consequences of them can be dire, all it takes is a moment to become distracted and potentially cause a crash and even worse, a fatality” explained Sergeant Carl Knapp of the Sussex Road Policing Unit. Drivers could be fined £2,500 and have 3 to 9 points added to their licence if caught.

Police insist they aren’t just picking on vapers. “Any person who is distracted in any way could be guilty of an offence - whether that be smoking, vaping or eating” explained Surrey Police Sergeant John Davis. The concern specifically with vapers is that they will exhale a big billowing cloud of vapour, and hinder their ability to see out of their windscreen.

Is This Even Fair?

We have to say it is a little circumspect to find the police talking about vaping and warning drivers. It’s not like we ever read about people eating in cars being warned that they’ll be fined. The same goes for smokers, who don’t ever get warned about smoking and driving. That’s one habit that is surely dangerous, because smoking anywhere is dangerous! At least smoking in a car with someone under the age of 18 was outlawed a few years ago.

Despite appearing to be singled out, it isn’t such a bad idea to restrict your vaping while driving. Anytime you have less than two hands on the steering wheel, you are in less control. We would argue, however, that smoking is much more dangerous. If you need to put your electronic cigarette or vapour device down, you can do so immediately with no recourse. With a lit tobacco cigarette, that isn’t the case – you’ll set something on fire.

Still, avoiding vaping while driving is probably best. Whether it is because you want to avoid any possibility of being stopped by the police, or just to be extra safe on your journey. “Driving is the most dangerous thing most of us do on a daily basis; it is a complex task, that requires your full attention to do so safely” insisted a spokeswoman for the road safety charity called Brake. We can’t really disagree with her there, can we?

The truth is, unless you are on a multi-hour trek across the countryside, you could probably wait to take that next puff. Or you could just make a stop along the way. Stretch your legs, have something to drink, and vape away calmly. Perhaps sit down and a have a cup of coffee, and use our Coffee and Vaping flavour matching guide to find the perfect combo. Lessening how often you vape and drive is something you should consider as a goal, regardless of if this new police emphasis on vapers is fair or not.