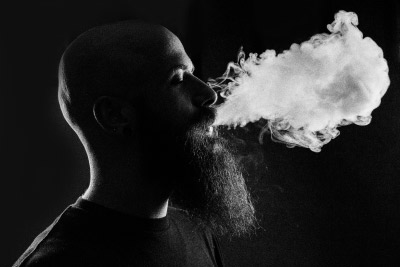 Some might say that vapers are a curious kind of people. Unending clouds of vapour bellowed like a dragon spewing smoke, endless devices which change every day and the ability to create amazing tricks with just vapour. The image of cloud chasers is one that often comes to mind when you mention vaping to those who aren’t familiar with the smoking cessation tool of e cigarettes, but the reality is, it’s far from the truth.

So, why are cloud chasers seen as the most prominent vapers and have their flamboyant ways damaged the industry in any way? Let’s find out...

The most obvious explanation for the prominence of cloud chasers is, of course, in the clouds themselves. Smoke-free folk would be forgiven for passing by a group of vapers competing for the biggest clouds and concluding that that’s what all vapers do.

But among the everyday folk is a ‘stealth vaper’, keeping their fix to themselves, who’ll go unnoticed. They’re unlikely to catch a glimpse of the office worker who causally puffs once in a while to keep cravings at bay. With an estimated 3.2 million vapers successfully switching to e cigs in order to quit tobacco products for the sake of their health, why is the cloud-chaser the poster boy (or girl) for vaping?

The Social Effect of Cloud-Chasers

As a newbie to the vaping scene, you might have ventured on to social media to check out what other people in the same position as you are doing, and you’d have been met with an interesting sight.

The most prolific vapers online have a certain image to them. They’re young, have their own style, have more mods and e liquids than you can shake a stick at, and aren’t afraid of showing off their tricks to their substantial followings. They’re confident, well-equipped and, as someone who isn’t well versed in the ways of vaping, you might be forced into thinking that you don’t fit in with this crowd.

Have Cloud-Chasers Damaged the Image of Vapers?

Just like in any rabble, there will always be a minority of people who ruin the experience for other people. Football hooligans, for example, are the most exaggerated form of football fan who cause trouble and regularly show themselves up at matches. In the vaping world, there are people with terrible manners, who frequently disrespect those around them - but cloud-chasers are not the culprits here. Yes, some of them will be, but as will the every day vaper who’s just taken on a number of bad habits.

In fact, it could be said that cloud-chasers get an unusually bad reputation for just doing what they enjoy - and as long as they do it responsibly and without causing anyone else any problems, where’s the harm in that?

The Reality Among Vapers

As a company who supplies thousands of people with their vaping paraphernalia every week, we can tell you first hand that the vaping world is a real mixed bag. From the old-school smoker who’s cut down from 20 cigarettes a day to the veteran e cig lover who’s been a pro since before most cloud-chasers were born, to the social smoker who doesn’t want to buy cigarettes on a night out, to the cloud-chaser who just loves filling a room with nicotine-free smoke - everyone has a right to vape the way they want to, and everyone is welcome at Vapour2.

Keeping It Casual with Your Vaporizer & E-Cigarette

If you've recently decided to give vaping a go and stop smoking, then a high quality, standard starter e-cigarette is all you need to get started. Look for a 50/50 blend of PG/VG e-liquid which will provide both a decent throat hit as well as a satisfactory cloud to replicate what you might be used to when you once smoked. If you’re serious about quitting smoking then these simple e cig vaporizers should be all you need to break away from the shackles that smoking have kept you in for so long. Choose from varying strengths of nicotine that allow you to eventually reach 0% and free from addiction and free from smoke.