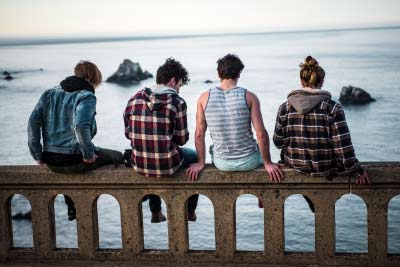 For many, ‘the unknown’ can open up a chasm of questions within their enquiring minds and for many, e-cigarettes are an unknown quantity bearing various alarm bells. Questions, hearsay, and myths are part and parcel of any industry in its infancy, but due to the nature of e-cigarettes as a nicotine delivery system, suspicion hangs in the air like a thick cloud of vapour struggling to disperse. Propelled by recent media coverage, one such conspiracy commonly found circulating the myth trail, is that e-cigs are appealing to kids and that they provide a gateway to smoking cigarettes. Let’s check the facts and set some minds at ease…

‘Vaping Will Lead Teens To Smoke’

Branding emblazoned with neon-coloured names. Gnarly sounding concoctions of flavoured e-liquid. Electronic vaporizer devices complete with multi-coloured LED-lit touch screens. Such associations with vaping can provide easy fodder for those claiming that kids will be attracted to vaping.

Like experimenting with any of life’s choices, there will inevitably be a handful of naughty kids seeking the thrill of doing something they're not supposed to be doing, like using e-cigarettes - it’s in our nature. However, to suggest that the minority of youths vaping may be tempted to smoke cigarettes then is a far cry from reality, with the number of youth smoking in the UK steadily and progressively declining since 1996.

While kids have a naturally adventurous disposition when it comes to discovering life’s intricacies and inventions, it seems unfair to focus on the possibility of kids smoking because of vaping when it seems almost inconceivable to ask the same question of an adult? Do you know any adults who have started smoking because they vaped?

Thankfully, those aware of the dangers that smoking present is ever increasing, if not universally accepted.

Data published by anti-smoking campaigners Action on Smoking and Health (ASH) shows us that the number of kids (11-18 years old) who do use e-cigarettes in the UK are relatively few and far between. Of the 2,971 surveyed, regular use of e-cigarettes was 2%.

Additionally, the number of youths who had experimented with e-cigs was also low with 12% of those surveyed saying that they had vaped once or twice. The study also found that the kids that do vape regularly already smoke tobacco cigarettes.

Rather than vaping providing a gateway for kids to start smoking, it's e-cigarettes that provide smokers with a healthier alternative to smoking. In 2015 Public Health England (PHE) published an independent expert review that said e-cigs are up to 95% less harmful than smoking traditional tobacco cigarettes and that vaping e-liquids can potentially help smokers become smoke-free.

The number of Vapers in the UK is estimated to be just over 3 million with many more joining the journey to become smoke-free every day. If you know someone in doubt about the benefits that vaping can afford to those that smoke, share the good news and help dispel some myths.