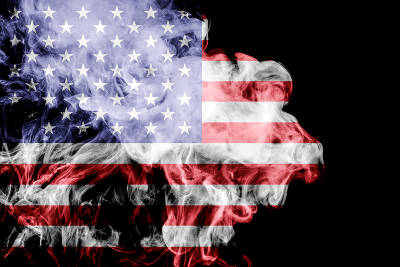 American vapers face enough obstacles. They have regulations in many states that treat vaping in the exact same way as vaping. They worried that taxes may slow down vaping, even before California enacted a large 27.3% tax on vapour products. They even had a surgeon general who appeared to be firmly against vapour, for whatever reason. It’s not as easy being a fan of vapour in America as it is here in the UK, that’s for sure.

We do remember that after the fallout of Donald Trump winning the presidency, there was some hope that his policies would be good for vapers. There was some reasonable optimism, being that there were more supporters of vaping in his party in comparison to the opposition. Purely looking at it from a vaper’s perspective and trying not to fall prey to political speak, you had to be hopeful for American vapers.

Well, the latest Trump plans are seemingly in direct conflict with the laissez faire approach everyone expected from him. The intentions he has of punishing foreign countries with trade tariffs is, again, a political question. Here, we’re only focused on what affects our fellow vapers. If you listen to what Americans are saying about the planned tariffs, you’ll know that they are worried about what it could do to the industry.

Among Trump’s plans is a 25% tariff on products from China. In case you haven’t realized this already, China is a main production engine for vapour products. High quality products will have people on the ground ensuring production at top standards, but they’re almost certainly making them in China. That means that vapour products could be in for a similar price hike, as producers pass on their extra costs to customers. This amounts to Trump’s tariffs targeting vapers, and it is not a good thing if you live in America.

This turn of events has the vaping industry in America concerned, and justifiably so. A 25% tariff on vapour products coming from China would affect companies and consumers alike. For small businesses, it could become a make or break event for their success. That’s what concerns business owners such as Bryan Robbins, who was interviewed recently in a Bloomberg.com article. Robbins is an avowed Trump supporter, but admitted that “It might be good for the trade deficit in the long run, but how many stores is it going to put out of business in the short term”?

Vaping businesses big and small alike could suffer when their own costs go up. The only relief they would have is to pass on these extra costs to their customers. The problem there, is that it will likely depress their sales. This is a problem that will affect everyone. “Yes, it will hurt consumers, yes, it will hurt the industry,” said Tony Abboud in that same Bloomberg article. Abboud, the executive director of the Vapor Technology Association, insists that it will have “a dramatic impact, especially for anybody who’s low or middle income”.

A hike in prices will affect business and consumers. It will also affect public health, as higher prices would discourage smokers from seeking an alternative to their dangerous habit. The number of smokers is on a decline in America as it is here, but how might that change if vapour prices rise dramatically? As proponents of vaping, it’s not a question we would like to see answered anytime soon. President Trump has been in the news a great deal lately, but these tariff wars are finally hitting closer to home. We’ll keep a close eye on these developments and hope the threat of higher vapour prices in America doesn’t materialise.