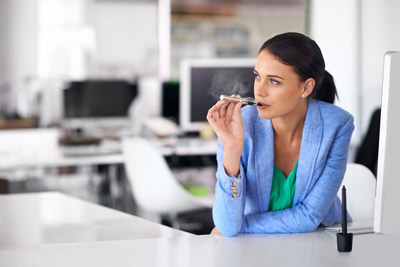 Significant developments regarding where we can vape took place this November as the All-Party Parliamentary Group for Vaping (APPGV) published their report on 'vaping in workplaces and public spaces' . Let’s take a look at the contents of the report and the potential, such advice to employers may have, to help shape the way we vape in the future.

The All-Party Parliamentary Group for Vaping (APPGV) are an informal group of Members of both Houses with a common interest in issues that may affect our population. They lobby and make recommendations for change based on existing research and work together with stakeholders from the public health community, vaping industry as well as consumer representatives to provide evidence to support the cause.

With an estimated 3.2 million vapers in the UK, Public health England declared e-cigarettes and vaping to be up to 95% less harmful than smoking tobacco products and that they have the potential to help smokers become smoke-free in the future.

With an ever-increasing population of vapers and a very real desire to further reduce the number of cigarette smokers, APPGV’s report on vaping provides recommendations to employers and even provides sample workplace policies for employers and the Parliamentary Estate itself to adopt in the future.

Policies that currently surround where you can vape are few and far between and are ultimately exempt from smoke-free legislation that includes bans on smoking in public places and the workplace. Therefore, policies that surround vaping in workplaces and even public spaces like shopping centres and train stations are left to the individual companies and tenants to determine the rules and policies themselves.

The importance of vaping policies is highlighted by the case that the majority of designated vaping areas typically share the same space of smoking areas, which presents a threefold problem in itself.

Firstly, estimates suggest 96% of vapers are either ex or current smokers, which means that when met with plumes of tobacco smoke, those genuinely trying to become smoke-free may feasibly be presented with unwanted temptations.

Secondly, vaping is not smoking and vapers are not smokers. The idea of grouping both members of these factions together in communal smoking and vaping area is that the perception of vaping by onlookers may be a negative one. As mentioned, Public Health England declared vaping to be up to 95% less harmful than smoking cigarettes and this message only gets muddied by mixing vaping and smoking confusingly together.

Lastly, by asking vapers to share the same space as smokers, employers and public spaces are simply limiting the incentive of those looking to make the switch to e-cigarettes.

It is with these three points in mind, that within the published report, the APPGV have provided what we think are workable e cigarette guidelines for employers to implement in the workplace.

It’s important to note, that whilst APPGV lobby to employers and Parliament alike about a more liberal approach to vaping in workplaces and public spaces, they also make recommendations for a vaper’s etiquette of mutual respect to also be adhered to -common courtesies if you like that promote vaping responsibly around others.

If you’re a vaper, why not show the report to your employer? You may encourage current smokers to ditch their habits and make the switch to e-cigarettes, which could be literally life-changing.