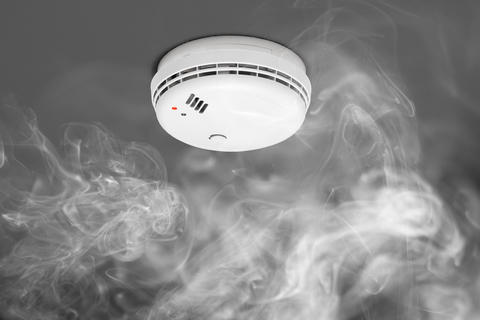 Sometimes you have this dream where you’re sitting in a room. You’re vaping away and thoroughly enjoying it. Then, out of nowhere, you hear loud beeping. It’s incessant. It gets into your brain and just does not, for the life of you, stop. You eventually realize it’s a smoke detector and your vaping has set it off. When you awake from this nightmare, you wonder to yourself if it was all a dream or if you’ll be reliving this in your waking hours.

Dreams can overdramatize events, but they can also bring to light our fears. If you’re a vaper, one fear you might have is setting off a smoke detector. Is this even possible? Well, that depends. We’ve vaped plenty in our own office and never set off our alarms. There are videos on YouTube of people experimenting by directing their vapour exhales specifically at a smoke detector. What’s the truth in all this? The answer is that the type of detector itself matters. Let’s go through the most popular types.

Detection by Heat – As you could guess by the name, these smoke detectors are sensitive to heat. That’s why they are often placed in kitchens and other places where things get hot, and you need to monitor when it gets too hot. These detectors are the least likely to get set off by vapour because vaping doesn’t really give off much heat.

Detection by Ionisation – These types of smoke detectors work in a very interesting way. They are built to be sensitive to particles of smoke, which are notably very small. By using two electrically charged plates, anytime smoke particles enter the space between the two, the alarm will be set off. You’ll find these to be fairly typical and may have one in your own home. They can be set off by vaping, but that won’t happen consistently, so it’s a hit and miss proposition.

Detection by Optics – These smoke detectors are similar in a way to those that work by ionisation. Namely, they focus on detecting particles that enter into their space. But in this case, rather than using electrically charged plates, they use optics. An infrared light is tasked with detecting the particles, as they scatter the light and trigger the alarm. These type of smoke detectors are the most likely to be set off by vapour.

Where to be Extra Careful

Obviously, you would not want to set off a smoke detector anywhere, but there are certain arenas where you’ll want to be extra careful. For instance, you won’t want to vape in the bathroom of an airplane. They have the most sensitive smoke detectors and thus you are much more likely to set off those alarms. Causing a commotion on a plane is never a good thing.

On the other hand, places like a hotel room are different. Even if you are in a non-smoking room, chances are you will not set off any alarm. But why chance it? When you check in, simply ask the front desk about vaping. At this point, they’ll have had enough experience to tell you one way or the other.

Overall, you should know that smoke detectors are made to detect smoke. Not vapour. As a general rule, if you aren’t vaping directly into or near a smoke detector you should be fine. Your exhale of vapour will likely dissipate way before it even reaches the vicinity of the detector. That being said, if you are at an important event or somewhere where setting off such an alarm would be very bad, perhaps step outside for a vape. While we’ve never personally had an alarm go off because of vapour, you can’t ignore that possibility completely. In the meantime, we’ll keep vaping on and you should too.