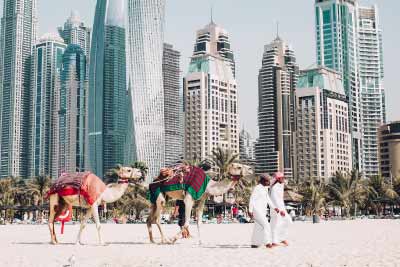 It’s sometimes easy to forget that vaping isn’t a globally legal and accepted concept. We know that vaping is significantly less harmful than smoking, but like our closest friends and family, not everyone necessarily shares the same views on vaping as we vapers do. While Public Health England state that e-cigs are up to 95% less harmful than smoking and have the potential to help smokers become smoke-free, alas there are areas of the world who’s health departments and governments think a little differently. As Dubai warms to the idea of e-cigs, vaping in public spaces comes with a very clear warning. If you’re thinking about visiting Dubai this summer, then you may want to think twice about vaping in public places.

Is Vaping Legal in Dubai?

Dubai is one of seven emirates that make up the United Arab of Emirates (UAE). Until very recently, the sale of e-cigarettes devices and e-juice was strictly prohibited under federal law, however, the vaping community of the UAE were left in a vape-like cloud of confusion regarding the actual use and consumption of those products. If it’s illegal to import does it then make the subsequent use of those products illegal?

With no specific law in place, it wasn’t until April of this year that the country lifted the ban on the sale of e-cigarettes thus clearing the air and introducing a safer and regulated market for those seeking to quit smoking and start vaping with the help of e-cigs to lead a healthier smoke-free lifestyle.

Penalties for Vaping in Public Spaces

Following the recent move by the UAE to allow the regulated sale of e-cigs, The Dubai Municipality has now announced that use of e-cigs, vape pens and vaporizers will be subjected to the same kind of laws as cigarettes. This means that vaping in public places will be strictly prohibited in places such as schools, shopping malls, hospitals and health facilities, as well as places of worship.

Those found violating the strict laws can expect pretty hefty fines ranging between Dh 1,000 and Dh 2,000 (£215 - £430). Don’t make a silly mistake and ruin a trip of a lifetime - keep a keen eye out for where you can and cannot vape. We know it can be hard, but try to keep your vaping to a minimum and ideally in privacy. You never know – less time vaping might make you realise that you might not need the nicotine as much as you thought you did?

Travelling With Your Vaporizer on a Plane

First time travelling by aeroplane as a vaper? As you might expect, similarly to cigarettes, vaping is not permitted onboard. Airports will differ on their regulations and designated spaces for vaping, so if in doubt, ask a member of staff for more details.

Making more than one-stop? If you’re in transit for more than a few hours and are keen on exploring your stop along the way, then make sure you know what the vaping laws in your next holiday destination. You don’t want to be left in a sticky spot, paying a fine you can’t afford and missing your next flight to your much anticipated holiday destination that you’ve been saving all year for.